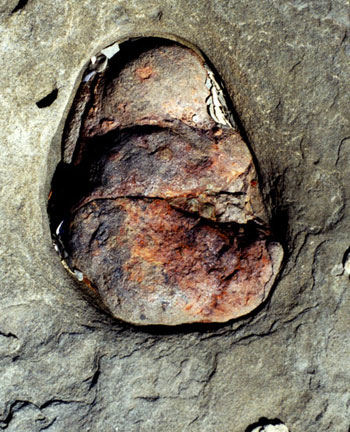 Recently I happily leafed through some of my favourite photographs taken over a decade ago on Hornby Island, BC. The ocean weathered rocks and the petroglyphs were of endless fascination to me, and I eagerly captured these on film. This particular one was a special one that I named Fetus Rock, and which I later used to create Meta-morphosis IV (Primo).

In fact quite a few of my Hornby Island photographs were used in the Meta-morphosis series, combined sometimes with photos taken in Italy (a story for another day). Here is a photo of one of the petroglyphs on Hornby.

I hope this comment gets through - I have not been allowed to sign in, but I'm not sure what I'm doing wrong.

I think that the Meta-morphosis series is my favourite. This photograph is astonishing. By the way, do you have any work in the miniature prints exhibition?

marja-leena: is this a natural formation, a fossil, or a petroglyph? It's very interesting! I'd like to send you a link to a photo of a rock on Kodiak Island near my friend's fishing/sightseeing lodge. He wants me to write a story about the rock formation in exchange for cottonwood bark for my carvings. The link takes you to Steel's contact me page, which has a photo of the rock 'face'.
Ciao!
~Jackie

Here it is for you to check out - I think it's an incredible natural rock formation! With your fascination for rocks and man-made markings on them, I thought you\'d appreciate it!
http://spiritak.web.cedant.com/contact.htm
~Jackie

Your keen sense of natural art always stirs my emotions which make me think about life in nature's world of creation.  There's nothing to signify this artwork is gender specific.  The name you've given shows virtuousness, quietude and tenderness - not prearranged persona.  This is truly matchless like the fingerprint of a human, and you have indeed unshackled a true-life made from the fundamental nature of a stone.
Welcome home - we've missed you!

Omega - I'm sorry you had some difficulties commenting at first! Glad you like my MM series. It was a major body of work for me.

You mean the BIMPE show? - no, I wanted to but did not get around to making prints that were small enough!

Jackie - this is a completely natural formation, on a rocky beach where the tides wash over it. The next year it had worn down even more and wasn't as stunning. Thanks for the link - that's a great rock "face" - reminds me of what we saw in Alberta last week!

Hi Roger! What a beautiful thing to write about my work - thank you! And I've missed you too and all my online friends! I'm just starting to catch up here after a day with the family.