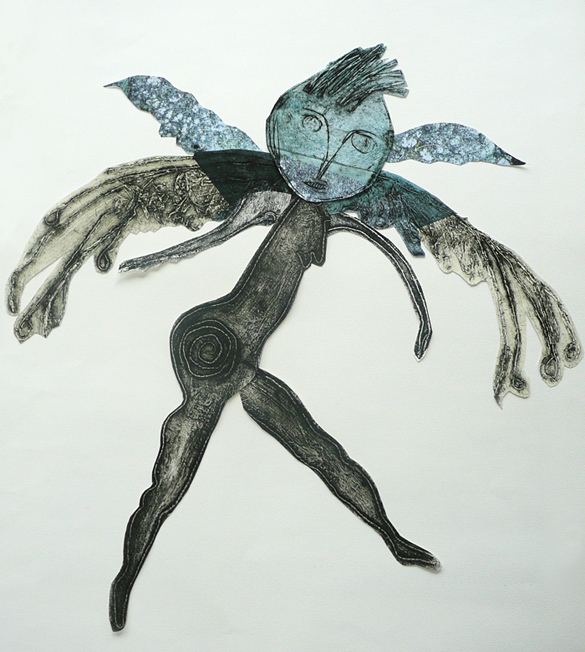 Please visit a most wonderful, magical and unique collection of maquettes by a diverse group of artists presented as a five-part online exhibition by Clive Hicks-Jenkins on his Artlog! I am so pleased to be included at almost the last minute in part five. Go see! Do visit part one, part two, part three, part four. Thank you, Clive!

Here's my earlier post about my sudden inspiration to try making a maquette for the first time and the encouraging comments to join the maquette exhibition, especially from Clive.

I like that Clive calls this my 'owl-woman resurrection'. That's because I cut up ('cannibalised' is the word Clive used) prints that were proofs from ARKEO #4 and Silent Messengers: Writing-on-Stone I. Here's also a post about the making of the trial proofs for the latter piece, should you be interested.

Oh, glad you did this! I put up a link as well, hoping that as many as possible will fly to the e-show. It is a marvelous hodgepodge of modes and ideas.

I've just been over to look at the show of maquettes and they are all quite wonderful. What a great idea for a series of posts and what a marvelous creative group participated.

Marly, of course, I just had to, for it really is a marvelous exhibition. Clive deserves a huge thank you for doing it, and so very well too.

Susan, the maquettes show is great, glad you agree. And thanks for the compliment on the Silent Messengers. I seem to be doing a lot of revisiting of past work lately.

Is there a confusion of terms, here? A maquette is (among other things) a sort of model that sculptors devise as a guideline to a much bigger, complete work. I can say this with some confidence since we were shown several maquettes when we commissioned a piece of sculpture of our two grandchildren (Now three: we're thinking of having the latest addition sculpted looking out of a basket, dangling from the hand of one of the older offspring).

Marquetry, currently being practised inter alia by Lucy is "decorative work consisting of pieces of wood, ivory, etc, inlaid in a wood veneer that is then applied to a surface, eg, of a piece of furniture."

Mere nit-picking but it does allow me to stick a foot in the door on a subject you may not have raised yet. Lord Black of Crossharbour, having served three years of a six-year sentence for defrauding investors and obstruction of justice, apparently intends to return to his original homeland, Canada, despite the fact that in better times, he took British citizenship in order that he could take a seat with a whole lot of other fraudulent individuals in our House of Lords. Two different opinions on this have appeared on the letters page of the Globe And Mail.

The other: "Canada's only real hero should be celebrated, not pilloried. Conrad Black is the epitome of tenacity and true grit. Get out the brass band, not the brass knuckles."

Years ago I raised this subject and despite your reputation for politeness I seem to recall the word "scumbag" appearing - no doubt for the first and last time - in your blog. Has time mellowed your opinion or have you already contributed to the brass band fund? I'd better add I am, as usual, merely being puckish.

LdP, you haven't changed even if your pseudonym has. Yes, a maquette is indeed a model, most familiarly known as a small scale sculpture study as you describe. Clive Hicks-Jenkins, a noted Welsh artist near you, makes articulated paper maquettes for use as compositional aids for his complex paintings. These are art works in themselves and are almost like marionettes when hung, such as displayed in his retrospective last year in the National Library of Wales (scroll down to near the end). Do check out his blog, his work is astounding. He inspired others to try out maquetting and with all the responses, posted this online exhibition - not to be missed! (No, it's not marquetry, an art that my father also practised as a luthier.)

Now getting very off-topic here.... As for CB, my opinion of him has not changed, only worsened if possible, and I am appalled and disgusted that THIS Canadian government broke our law against allowing criminals back into the country. I wonder, would Britain take this lord-who-did-not-inherit-the-title back? You can have him. Obviously money and 'peerage' talks, wouldn't you agree? Oh, and if he wants his Canadian citizenship back, he has to give up his title.

Still off-topic, I thought of you and your music blog when I read this: Shouldn't You Be Fatter? (And Other Opera Singer Myths) Any puckish comments on this on your blog perchance?

Thank you so much for stopping by and leaving such kind words over on my blog. I thought I'd leave a wee note here to tell you that I really loved your maquette as well and was really excited to find your blog thanks to this maquette project. Also, that shot of your studio below is incredible... it looks so lovely where you are!

Jodi, thanks for stopping by here and for all your kind words too. I'm glad you saw the studio post for that's where I mentioned how your maquette inspired me to do one, a much simpler one compared to yours. Clive's exhibition was indeed a wonderful way to meet other artists and their blogs, including your most beautiful one.