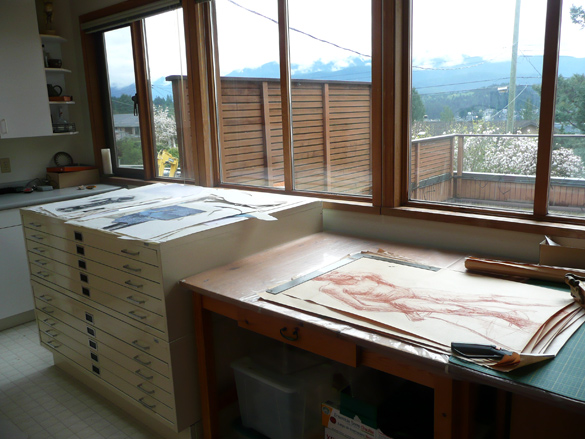 As mentioned a couple of weeks ago, I have been reorganizing and cleaning my small home studio to make room for a very large set of used flat files which I'd finally found after years of searching. What a job! Though not finished, the studio is looking much better and my editions have a clean, flat, accessible home, except for one over-sized edition which is staying in its porfolio for now. Though the file cabinet is too high as a working surface, it provides much-needed space to spread out my papers, such as many print proofs, thus leaving the table top free to work on.

It was interesting to revisit my older work as I was organizing them into the drawers. I have now made a start at some of the many rolls of life-drawings on newsprint, stashed in tall boxes in a former bedroom/storage room. Most of these were done in the 70's and early 80's when I attended various life-drawing workshops. Drawing and especially life drawing was my favourite class back in art school where we had two days a week of it (you don't see that anymore in most art schools). What I've kept of those are probably somewhere in the bowels of the crawlspace under the house. Being newsprint, these are yellowed, fragile, torn and hard to unroll flat, but I am going to try to photo document some of the better ones. Here is the first, a fairly quick though imperfect study: 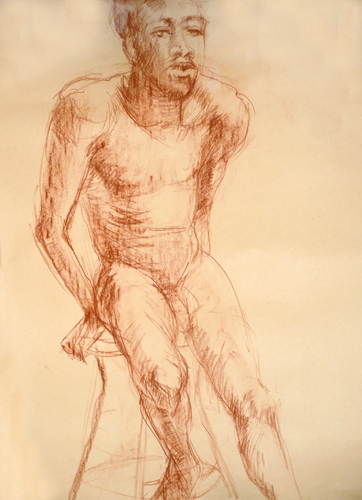 Inspiration hit me a couple of days ago, from admiring my clean studio, the pile of proofs and from Welsh artist Clive Hicks-Jenkin's blog. Clive frequently makes wonderful maquettes for his various projects which he so generously shows readers. Recently he put out a call for readers to make their own and submit them to him to feature on May 1st. I have never made any and had no plans to start at this time, but the other day, Clive's post on artist Jodi le Bigre's stunning maquette must have left a deep impression on me, for lo! I suddenly started cutting up some of my collagraph proofs to create the figure below. It is not a maquette for the paper is too light and I had no appropriate fastenings, but I had fun! I'm not sure what will happen to this creature, maybe it will become a maquette yet, though of course too late for Clive. 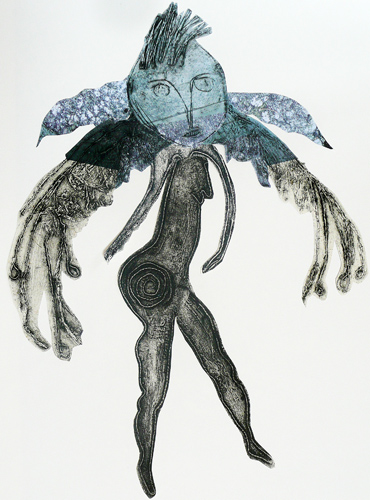 Added May 4th: As I wrote later, my maquette in other poses made it into the five-part online exhibition of maquettry hosted by Clive Hicks-Jenkins on his Artlog!

I love the look of your studio, especially the wonderful view through your broad windows as well as the magnificent new flat files. I can see the magnolia! It looks to be a most comfortable space.

You know I never guessed that art schools don't stress figure drawing any more. That just seems altogether counterintuitive. I like the one you've shown and I can see you had fun making the mock maquette.

Please order those brads online... you can get tiny ones these days, due to the explosion in paper-crafting hobby shops... and finish the maquette. e-mail me some images of it. The exhibition has been divided into five posts. You have at least a week before I'll be posting the last, and so THERE IS TIME! Go do! (-;

The image is wonderful. Love it!!!

And Happy May Day Eve!

I totally agree with Susan about the live model drawing. Drawing is absolutely in the basis of becoming a visual artist, even though the artist might end up doing something entirely different.

It's good for training the work together with eye and the hand and get the brein accustomed with work.

I myself learned to draw when I was 14 under a guidance of my visual art teacher in school, and continued the practise in week end courses afterwards. Then I took and married an artist. So there was a pause of 30 yrs and no drawing. Then just by an impulse I went back to a course and noticed that I haven't forgotten it.

It's like bicycle driving or swimming. You studio room looks delicious!

looks just wonderful, i am envious of those flat files! i must shuffle through my old work sometime too. x

I am most envious of what you call flat files. They are called a plan chest over here - from architect's plans. Unless I have got the piece of furniture wrong. I live in hope of perhaps finding some when I have enough room in which to put them! Hey ho. Portfolios will have to do until then. I had no idea when I started printmaking that I would accumulate so much extra paper - should have known.

I agree about life drawing. I did benefit from the change in art colleges however. The local art college had life drawing as an optional extra for students, and so had the class in the evening and decided to offer it to paying students also. Unfortunately they don't do that any more. I loved sitting in a corner also deriving the benefit of observing the work of the students along with the class itself.

Susan, I'm very lucky to have this room, one we added to the house when we did major renovations. It has lots of light with the one wall of windows plus a skylight. One can never have enough space or enough table tops so I need to keep this space well organized. A sewing desk and dresser are still in there "temporarily" but will soon have a different home elsewhere.

Taina, kiitos! To answer what a 'maquette' is, I like Susan's phrase 'mock' maquette, for that is what a 'maquette' originally means, a mockup, model or trial for a sculpture or architecture. (See wikipedia.) In Finnish I think it would be malli. Clive has been using maquettes as a way to try out the positioning of his figures for his many paintings. They are works of art on their own.

Clive, I hope I explained your 'maquettes' correctly. Thanks for your positive encouragement. I'll try to get out to a craft store and look for those 'brads'. Don't I also have to glue these paper pieces to something heavier? Cutting card in these fussy shapes doesn't excite me but maybe I can find heavier paper.

Ripsa, why yes, it is May Day Eve in Finland - Happy May Day!! I didn't know you've studied so much drawing, though I know you are married to an artist. Good to hear you are taking it up once more. If I had more energy, I'd like to do life drawing again, but years ago I decided to focus on printmaking instead of flying all over the place with different media. But I have always appreciated those intensive drawing classes with an excellent artist for laying down the skills to do any kind of art. I'm sure it is also why I fell in love with printmaking in my last year of art school.

Elisa, it is a most interesting exercise to review one's old work. You have several paintings and a portfolio in said storage room :-). I wish I'd done more photo documenting along the way but it wasn't as easy as it is today. I do have some slides of paintings I should look for...

Olga, they are also called map files here, and yes they are intended for architectural or engineering drawings. They are not so popular anymore with digital formats taking over, so maybe that's why I so lucky to finally find this. I wonder if the naming came from the more familiar and also metal upright office filing cabinets. I do have very old wood ones as well - see a glimpse here, which somehow suit the name 'plan chest' better. Yes indeed, there is too much paper with all those proofs and editions. At least we are not into huge canvases or sculptures. I think I need to have a 'fire sale' to reduce my older inventory. Plans for an online site for sales are incubating....

And we all heartily agree regarding life drawing! In my student days it was a requirement, not an option.

What a lovely space, very airy and orderly.

I love the maquette - the little scrapbooking brads I got are very fine, and would work with quite light paper. This maquetting thing is really taking off, and it's given me quite a new lease of blogging life, with new avenues and contacts to explore.

Lucy, thanks for dropping by. I was just revisiting your blog post about your first maquette and looking at the brads you bought. I'm glad to hear they will work with light paper. Some pieces are heavier, some very light. Now to locate those brads... and, oh, something that would work like your "winkle pin".

Readers, if you want to see what we are talking about, please read Lucy's post on maquetting.

Yes, I want to see the maquette on Clive's Artlog!

By all means, join the maqueteers, you have a knack for it and some of your left-over prints would appreciate being thus transformed. Makes me think I'd like to recycle some of my prints this way! I love the creature you've made.

Re-visiting one's old life drawings is fun and enlightening - I particularly like the one of the woman in profile. Some day I must organise my vast quantity of drawings, currently languishing, yellowing and sometimes disintegrating in portfolios!

Natalie, thanks for the encouragement. I feel a bit of a cheat to come in so late, it wasn't my intention to join at all. As it is, I haven't been able to locate any brads so I'm going to have to try another way and hope to finish it tomorrow. It will just be this one modest effort compared to the generous and wonderful output from so many artists that Clive is featuring on his Artlog!

I do love using old proofs for different things and why not, all that paper and ink and labour, eh. Go for it, Natalie! Yes, organize your drawings and show them to us. Glad you like mine.

Marja-Leena, I can't even begin to tell you how much I love your owl-woman! I saw her first at Clive's and then came over here to tell you. Taking her out of the printed page does something - well, it frees her -- but the printed textures are so rich and yet weird that the emotional feeling the maquette/puppet gives is very strong. She's my favorite of all the beautiful maquettes in the exhibition.

And how great to have a glimpse of your lovely studio with its beautiful light, and these old life drawings! More please -- drawings, and maquettes!

Beth, I'm just thrilled that you love Owl-Woman, thanks so much for your thoughts on it. And to think it was such a spontaneous and playful act. You really must come visit my small studio, not anything as big as yours but the light and view are nice. I will show more drawings as I go through them, thanks, but we'll just have to wait and see if more maquettes give birth.